“They did this study. They isolated a group of people over time, and they monitored their abilities at crossword puzzles, right, in relation to the general population. And they secretly gave them a day-old crossword, one that had already been answered by thousands of other people, right. And their scores went up dramatically, like 20 percent. So it’s like once the answers are out there, people can pick up on them.”

So I had this project for a year called Band Over Boston.  (Ignore that quote for now; it’s not really important.)

It was a computer set up in the back room of In House Cafe, a little cafe at the corner of Harvard and Commonwealth Aves in Allston.  It had an iTunes playlist loaded full with local Boston (and suburban to Boston) music, and it was always connected to the In House WiFi network.  iTunes was open and the BOB playlist was set to “share over network,” with downloading disabled.

What this meant was that anyone in the cafe with their laptop open (which was generally a lot of people) and iTunes booted would see this playlist called “Band Over Boston” and could go in and browse, library- or jukebox-style, and listen to tons of local music, for free, at will, on their own computer.  I had flyers set up by the cash register advertising it and explaining how to find it; by the end of the project’s run, I was refilling a few dozen flyers about once a week. 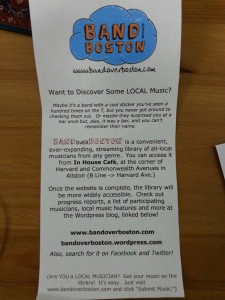 The advertisement flyer I used outside of the cafe

As I was a local musician myself, the support and cooperation of the local music scene was
paramount to me, so I did not add anything to the library without permission, and I reached out to countless musicians to see if they wanted to take part.  Shortly after I announced the idea and started putting the word out, I had about 150 bands and musicians not only submitting their music by my request but getting in touch out of the blue, excited about the project.  I also gave some interviews and talked about the idea with press outlets like Northeast Performer Mag, Evolver.fm and Boston Band Crush.  The concept (plus some monetization ideas) also won a $1000 business concept competition at Boston University’s School of Management.  Two friends, Joan Cerdas and Patrick Coman, helped with some of the graphic work, design, and blog writing as the project unfolded.

The obvious intent here was to bring local music to a new audience.  Although music is reveling in myriad new ways to deliver music to people outside of the tired major label pipeline, some of the best music I’ve ever heard was in a little bar in front of a little stage with as few as 20 other people next to me in the audience.  I mean, and at the risk of tired simplification, Nirvana was that annoying band in the garage next door to someone at some point.  There’s great music being made right down the street, and I wanted more people to know they didn’t have to spend $80 to get into a big arena to get their socks knocked off by a guy slinging a guitar; they could be standing close enough to have his sweat slung onto them instead (awesome, right?!).

But the idea was not only to bring local music to a new audience, but also to bring a new audience to the cafe and, ultimately, other cafes and WiFi hotspots.  By advertising the project on social media and a few blogs and starting a little music review column (excerpts of which can be found on my music writing page), I spread the word not only about BOB but also its cafe home.  I had a website up with a description of the cafe and an embedded Google map pointing out exactly where it was.  Local music as a draw to a local, independent cafe.  I was soon hearing from people who worked the counter there that new customers had come in and asked about Band Over Boston, as well as musicians visiting the cafe to ask how to submit music.

My next step, in short, was to be to reach out to other cafes to expand the project to new WiFi hosts.  I would then print small logo stickers (something like the beside logo) and have them in a window at each cafe, as well as designated cafe “profile” pages on the BOB website, to visibly tie the project to its physical spaces in a non-intrusive way.

I also wanted to have a proprietary player programmed, so I didn’t have to run it through iTunes but so it could still be visible by iTunes.  I had a deep feature-set planned for the program and a parallel mobile app that would enable easy interaction with the local music scene based on what you listened to and what you gave a “thumbs up” within the player.  Features would have included pointing you towards buying music you liked directly from the musicians, adding you to email lists, and adding your favorite bands’ upcoming shows to your calendar of choice, among a number of other “one-click interactions” with your local scene.  Users could also just browse by what was being listened to or what was hot at the time if they wanted an entirely new experience (there would be a splash page chart), or browse “celebrity playlists” with a local spin – playlists created by local musicians – and other spotlight playlists by locals like cafe workers, politicians, public service workers, educators, etc.  The mobile app could add a plethora of GPS features; after all, we’re talking locality, here!

Not only does all this make a large local music landscape more digestible for the listener, it also provides a new tool to local-level musicians.  Musicians could find new bands they may not be socially or otherwise connected to that are similar enough to share the bill with.  And by checking out other cities’s libraries along a potential tour route, musicians could see what bands and, more broadly, what music was hot where to help them plan.

On the other side of things, I wanted to deepen the relationship between the music and the cafes (or other WiFi hotspots) by creating, with the cooperation of the WiFi host and select bands, certain deals, like “happy hour” specials (buy x between the hours of y and y2 and get album z for half price!), “buzz points” (get a free small coffee if you recommend the cafe or your own local music playlist to x number of friends), pairing deals (a free coffee if you buy a certain album or a certain number of albums), flash sales, recurring free song download periods, etc.

Ultimately, I wanted to take the project beyond Boston, and beyond local music ecosystems and tap into the broader music landscape.  I wanted the program to look at what (inter)national or major-label acts you listened to and suggest local bands based on those, for example.  And there would also be of course a local music library for every major city and its surrounding suburbs, and umbrella features would add a new dimension to traveling (or touring, for musicians) by suggesting local bands in other municipalities to you based on your hometown faves.

So why all the above “wanted to” and “would have” phrasing?  Alas, I was working on BOB when I was playing a lot of music and not making very much money, and I did not have the time or funds to pursue the project to the heights I envisioned.

Why am I writing all this, then, about a dead project?  First off, one of the goals of this website is to serve as a kind of EPK, and this is I think an important part of my musical past.  Also, in part because I believe in the underlying “hive mind” idea behind the quote that opened this little piece (from the movie Waking Life), that once ideas are out there, they’re part of a collective awareness – granted, that’s a little obvious if they’re written up online, but for both these reasons I wanted to put this idea and some of its heretofore un-publicly-discussed future concepts down in a public space.  Similarly and also, because I still think it’s a great idea and maybe, just maybe, someone will see this and start a similar venture in their city, or use some of these ideas and expound upon them to make a truly great tool for pairing people with their local music scenes and their local businesses.  Yes, there were some business elements baked into this idea that I could probably hoard, copyright/patent and pursue, but I want most to see the principles and the core motivations and values for the project reach their full potential, notwithstanding my own personal schedule or ability – and besides, many minds working together are greater than one alone.

So whether I begin the project anew myself, with a partner in one city, in parallel with a partner from another city, or whether someone completely different takes the reins and follows through on this or a completely different platform with the same core values, here’s hoping localization is the way of the future.  Because with an ever-thickening web being spun around us, it’s that much more satisfying to remember and appreciate just where you are.