The Latvian maestro takes three young, promising conductors and puts them in front of the Royal Concertgebouw Orchestra to rehearse Berlioz’s Symphonie Fantastique and Shostakovich’s Fifth Symphony.  Jansons then watches over them as they conduct run-throughs of the pieces, and jumps in on subsequent runs to provide feedback.  Some of the musicians in the orchestra, all masters in their own rights, also sit with the young conductors and describe their performances from their points of view.

The program came up in a conversation with my brother in law when we both decided we didn’t know enough about the world of classical conductors or their art.  “Master Class” in turn provides a really fascinating look into the craft.  As a should-be owner of Classical Music for Dummys, I really had no grasp of what the role of the conductor was aside from providing the tempo, keeping track of meter, and giving simple ques for instrumentalists.

One of the young conductors, a Chinese guy named Yu Lu, said his friends were worried about him going to the Netherlands for the show because he spoke no Dutch and not much English.  He said to them that he was not a bit concerned, for music is an international language.  I recount this because there really was so much more communication between the conductor and the orchestra than I imagined, even having assumed my preconceptions were surely woeful underestimations.  And it was fascinating to see not only verbal tips and suggestions from the conductor between runs, but also the extent to which the conductor physically interpreted the music, contorting his face, wiggling his fingers, snapping his wrists.  Yu Lu was particularly interesting to watch, his physical manifestations of the score being as nuanced and genuine as subtle arching of his eyebrows.  It was even described by Jansons at one point as being an actor – one must, to conduct, not only read the music, hear it and feel it internally, and communicate this verbally with the orchestra, but physically provide not only temporal and rhythmic cues, but also the “emotional sculpture” of the piece, as it were – convey the peaks and the valleys, the tension and the ecstasy.  Everything from sharpness of movements to amount of hunch in the back – it was impressed upon each aspiring leader that everything he did with his body was a message to the orchestra and of total import in achieving what he meant to achieve.

So, although I have nothing to do with classical music, I found there to be universal truth in this, not only in how we communicate music to an audience but how we communicate ideas to each other, musicians or not.  Plus, it’s just super entertaining to see something so abstract and subjective get dissected.

What was also interesting to me, though, and which I won’t harp on too much, was the interaction between the 19 year old Alexander Prior and the orchestra.  He was admonished a few times for being too controlling, too forthright with his opinions, and having too strong a penchant for micromanagement.  Despite his talent and clear vision, it was suggested to him that he was being overbearing and risked souring the relationship with his orchestra.  Classical orchestras are of course a different context than, to give a predictable example, rock bands.  We in conversation at home even likened the former to a religion in ways – you have your composer, who is usually dead and gone, leaving the conductor to be the “priest,” the interpreter and vassal in which the real meaning, the core truth of the message must reside.  In a rock band, things are often more democratic – but not always.  Whatever the format of the band, though, I thought this urged-diplomacy was another universal aspect to music.  The conductor depends on his orchestra just as they do him, and perhaps that’s even more true in an established band that often has less of a hierarchical construct and more of a creative co-dependence.  What we say and how we say it matters; it can be said that even within a system like an orchestra where there is to be one leader among many voices, tone is important.  I’ve thought this obvious, but I’ve had enough interactions to know the message has not made its way into some skulls.  For many it should be a reminder and an interesting parallel.  For some, I must say sadly – but suggest hopefully! – that it may be a lesson in leadership and expression.

Anyway.  I meant to go back and re-watch it to glean what else I meant to talk about, but the internet at home is apparently trying to match the speed of the fresh grass growing outside.  So I recommend it to any and all, musician or not, as a really fascinating and potentially instructive watch.  Find it below in two parts.  And by the way, the beginning contains much Dutch, but English soon takes over.

I found an old song map notebook stuffed into my suitcase that I used early/middle last year for some projects.  The notes are for songs by Shoney Lamar & the Equal Rights, Mr. Kowalsky, School for Robots, and the as-yet untitled Clinton Degan project, scrawled roughly either while writing or learning them with the bands.  They include the usual guides such as “Verse,” “Chorus,” “Intro” and so forth, as well as such made-sense-at-the-time bits as “ratatats,” “Octopussy tag,” “glory section,” “funny kick,” “quietish,” and more.  And apparently I only know how to spell “ritard.”

I know I’ve got some notes from older and other projects kicking around somewhere.  I’ll try to find those and add to the photo set because I think it’s a pretty funny thing to look back on and scratch the ol’ noggin over. 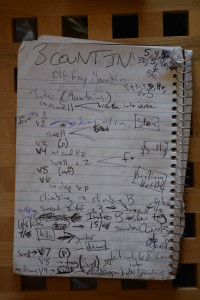 Grant of Electric Laser People just sent us all this old clip, and I thought I’d share it.  I hadn’t even put it on my media page.  The Cambridge scene cornerstone, All Asia, has since been leveled for new MIT facilities, so here’s to the fond memories.

I’m currently in Germany but some things I recorded before I left are still cooking back home.  I’ve recently added a few links in the Discography and Media section and will continue to do so as projects continue to wrap.  Happy 2014.

A couple things have come out in the time that I’ve been busy slacking on my blogging.

I got to venture back into The Den in North Reading, home of the certified most laid-back recording sessions possible, and lair of Doug Batchelder, engineer and guitarist extraordinaire.  We cut a red-in-the-middle-rock arrangement of Jackson C. Frank’s “Blues Runs the Game” that Bill had put together a couple weeks prior.  Bill played rhythm guitar while he sang, and Doug handled all the other strings.

A band I was in for about two years called 28 Degrees Taurus is about to release a full length album, and has put out a little single in advance.  My drums are on all three songs, but apparently only “Vast Majestic” will be on the full-length.  I cut these drums about a year ago so I’m happy to know they’re finally seeing the light of day.

The first collection of highlights from Bill Dwyer Band‘s first 3-hour night at Queen’s Head Pub has been posted on YouTube.

The night was a blast, and there were too many highlights to choose from for one “reel,” so I’ll be putting together another selection for viewing at the end of the weekend or early next week.

Always an ineffable pleasure to rock with these guys, both for their energy and their talent, and we were fortunate to have such an enthusiastic audience to enjoy the night with us.

BDB will be returning to Queen’s Head Pub on May 6th. 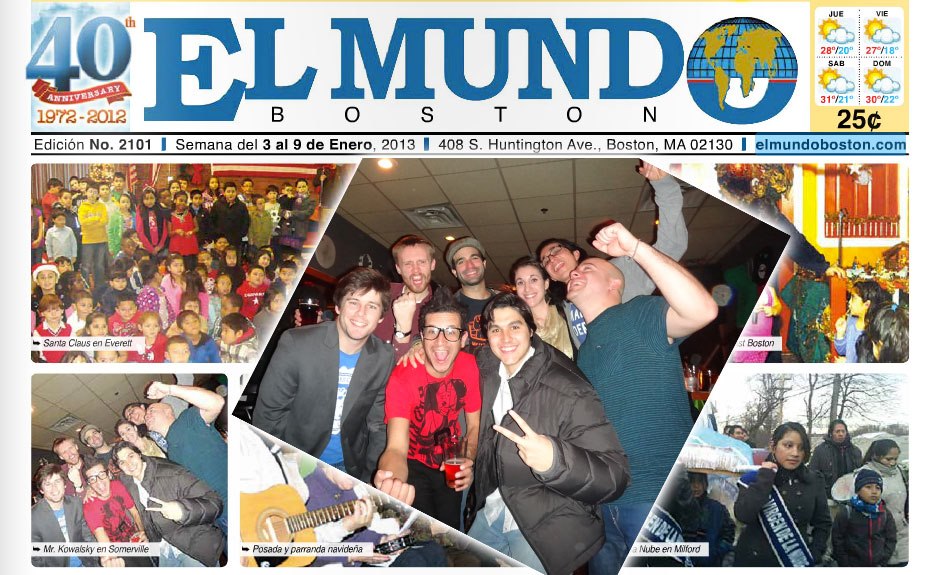 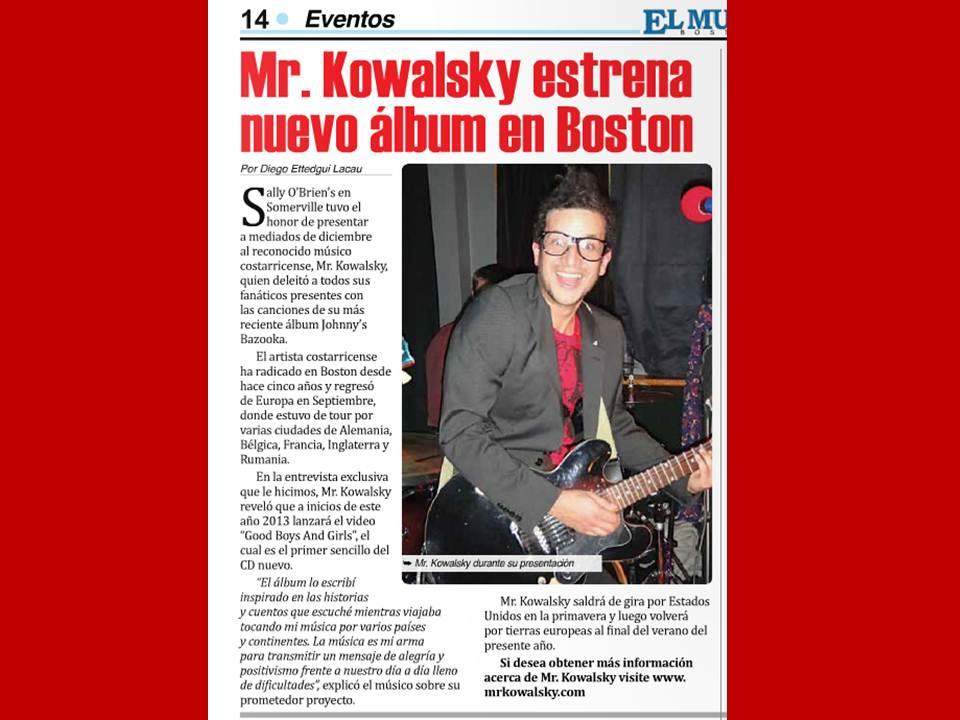 Self recorded with Lance-dynamo at the helm, the album took a couple months of recording and mixing and many more of writing.  We hope you enjoy it.  Note we do have physical copies for order through Bandcamp.  Thanks for your time. 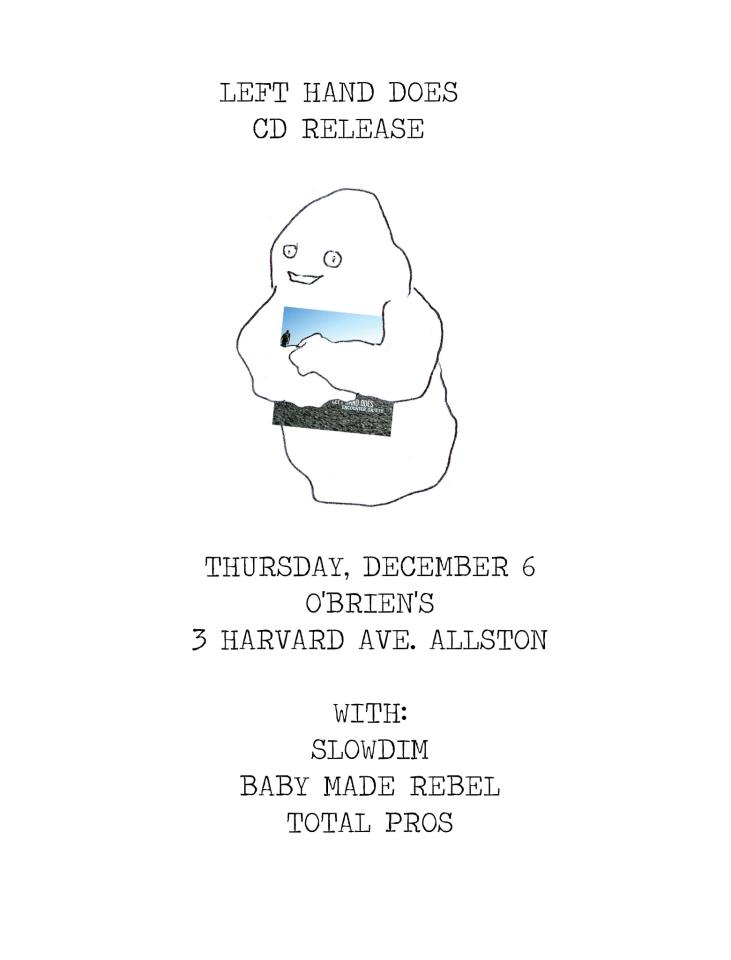 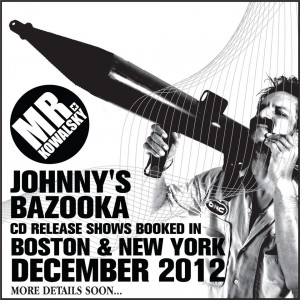