As the summer’s coming to a close, I thought I’d post a few more photos, for archiving’s sake, and remark on how fortunate I’ve felt about some things I’ve been able to be a part of.  From beautiful locations to new equipment to tour with friends to three weeks back home, it was a summer with lots of highlights.  Some of these I’ve featured in past posts, but others I still wanted to represent with a photo or two.

First up, largely for Shubangi and partly out of morbid curiosity, I’ve joined the “dark side,” as my buddy Bill Dwyer would probably put it:

I have since purchased two Roland BT-1 percussion bars to run into this thing, as opposed to the triggers.  I’m excited to work with the triggers more, but for now they’re impractical and don’t fit with what I need samples for.  We’ll see when or if that changes.

Here are some pictures from the last Shubangi gigs of the summer. 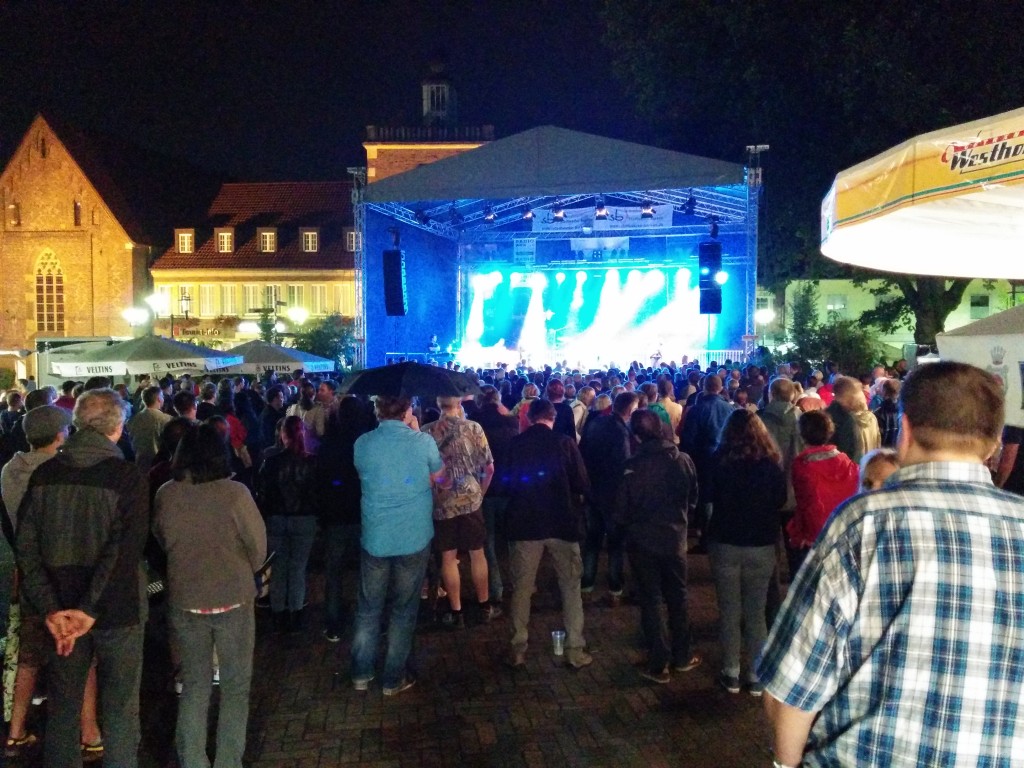 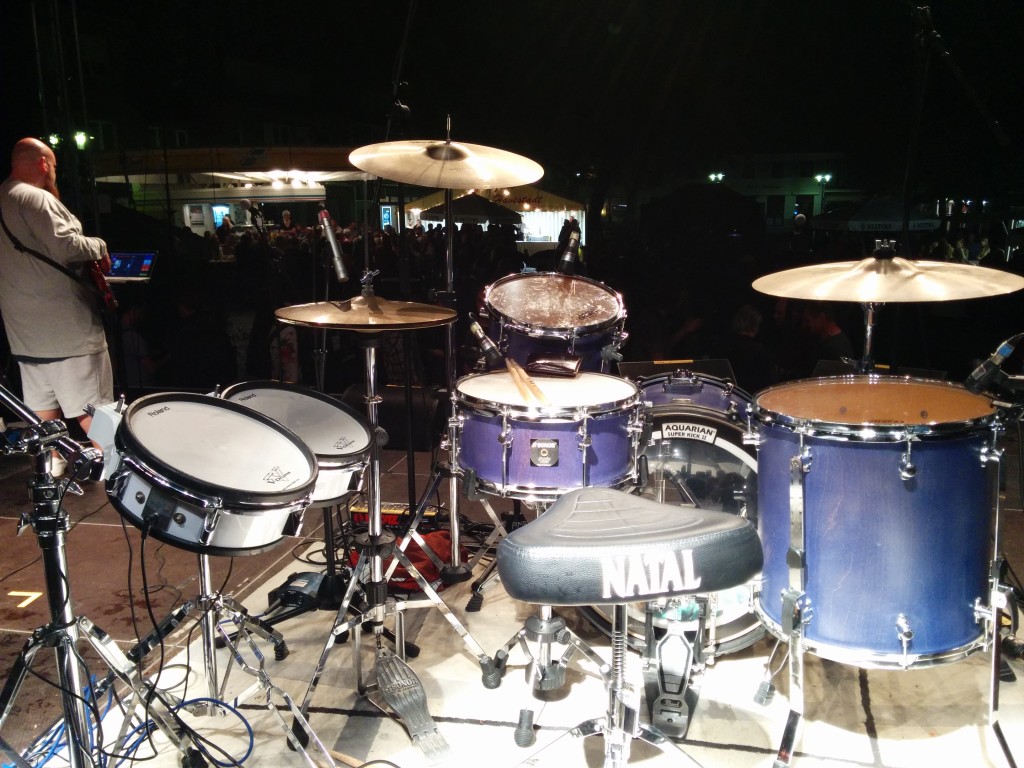 Setting up in Borken. That’s an old Sonor Sonic Plus kit, made in Germany of all birch. Sounds a lot better than what’s billed as a beginner’s kit ought to.  Crazy hardware as well… look at the floor tom legs, for example. 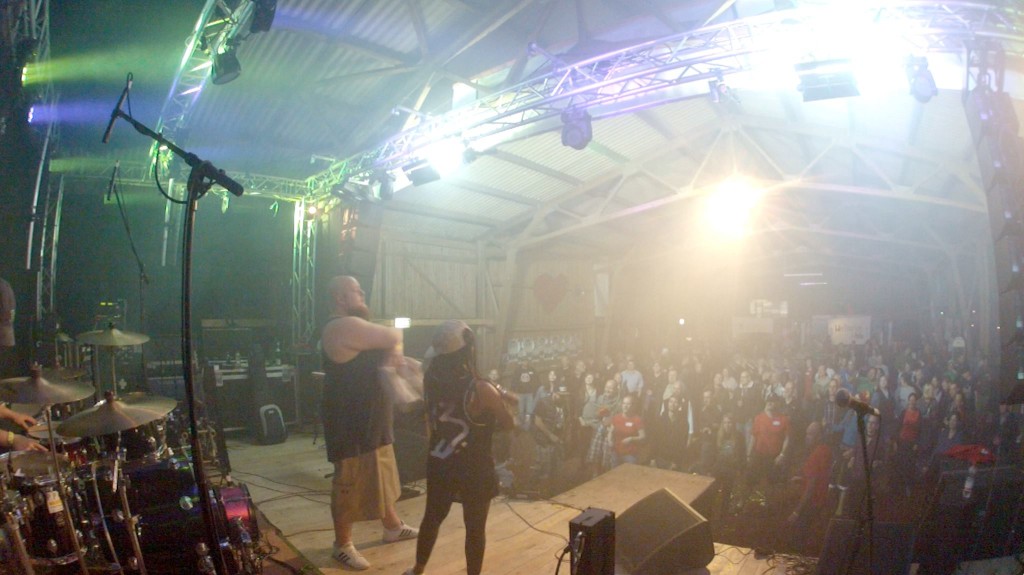 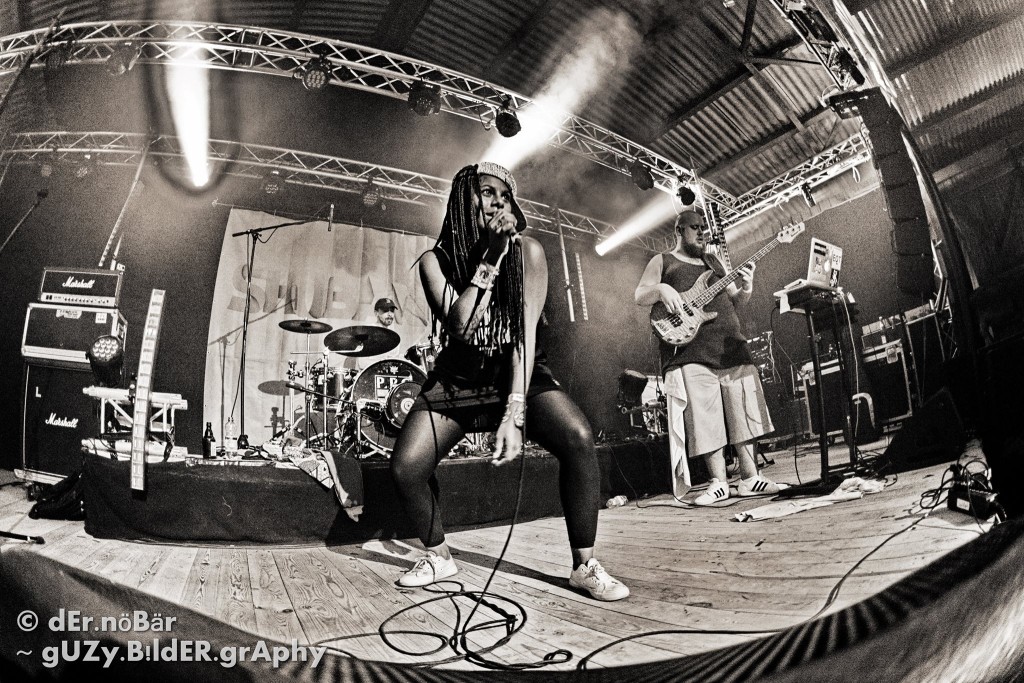 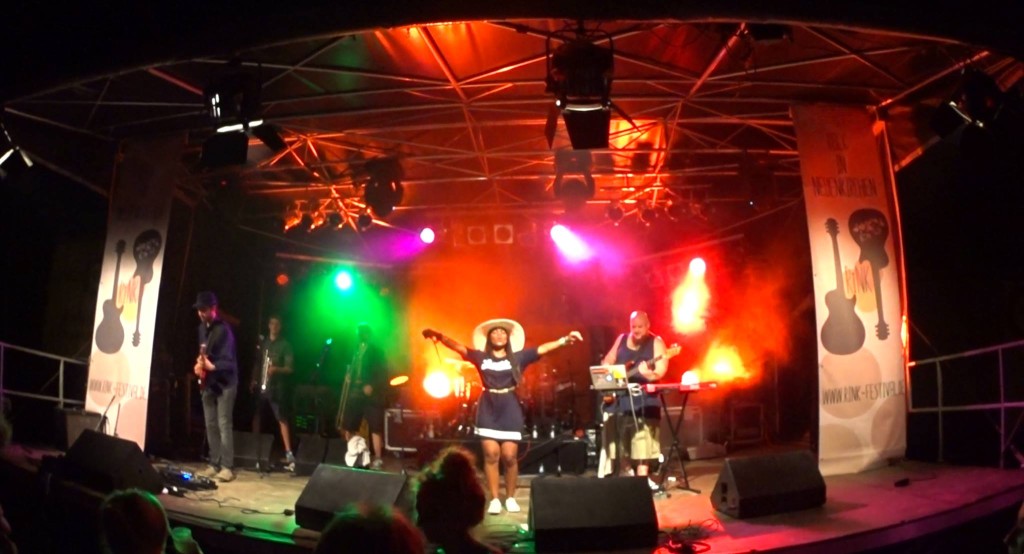 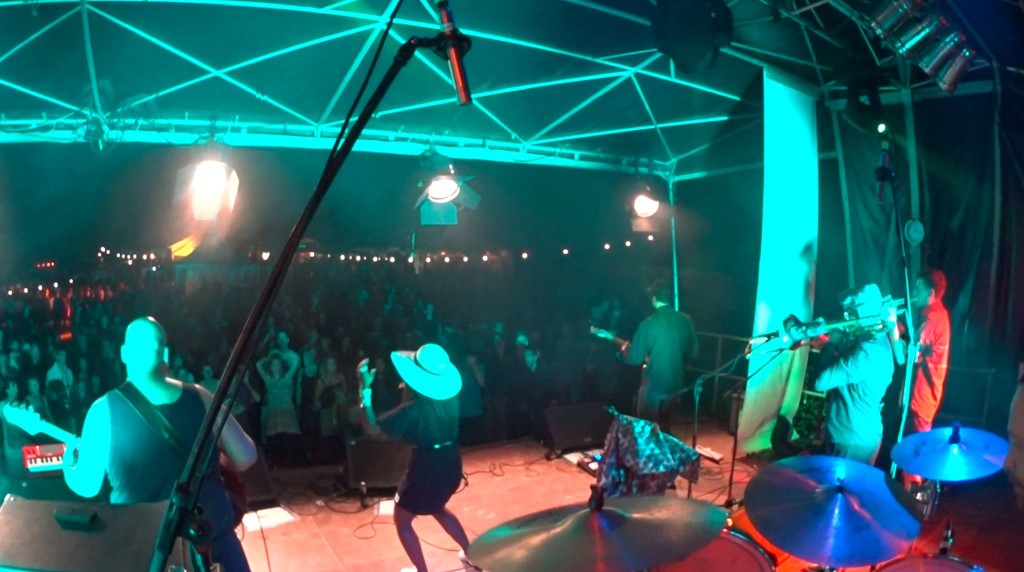 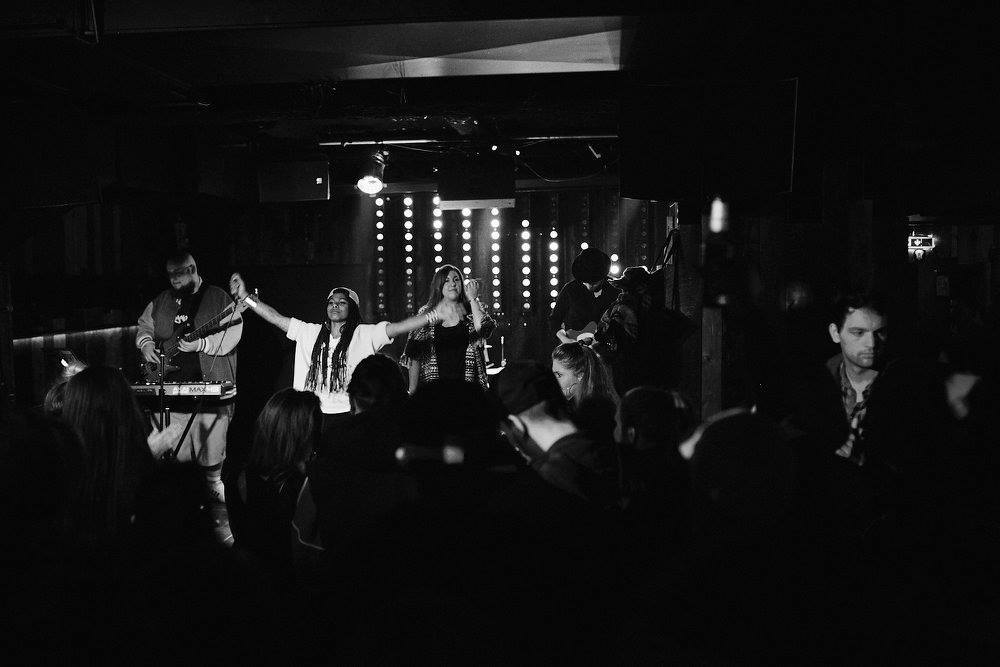 Session.One at the Kleiner Donner, Hamburg

I was home in Boston for a few weeks as well, enjoying lots of family time which I’d sorely missed, and got to see some old friends, and even play a little music.  I didn’t take many pictures, which I should have, but musically speaking: 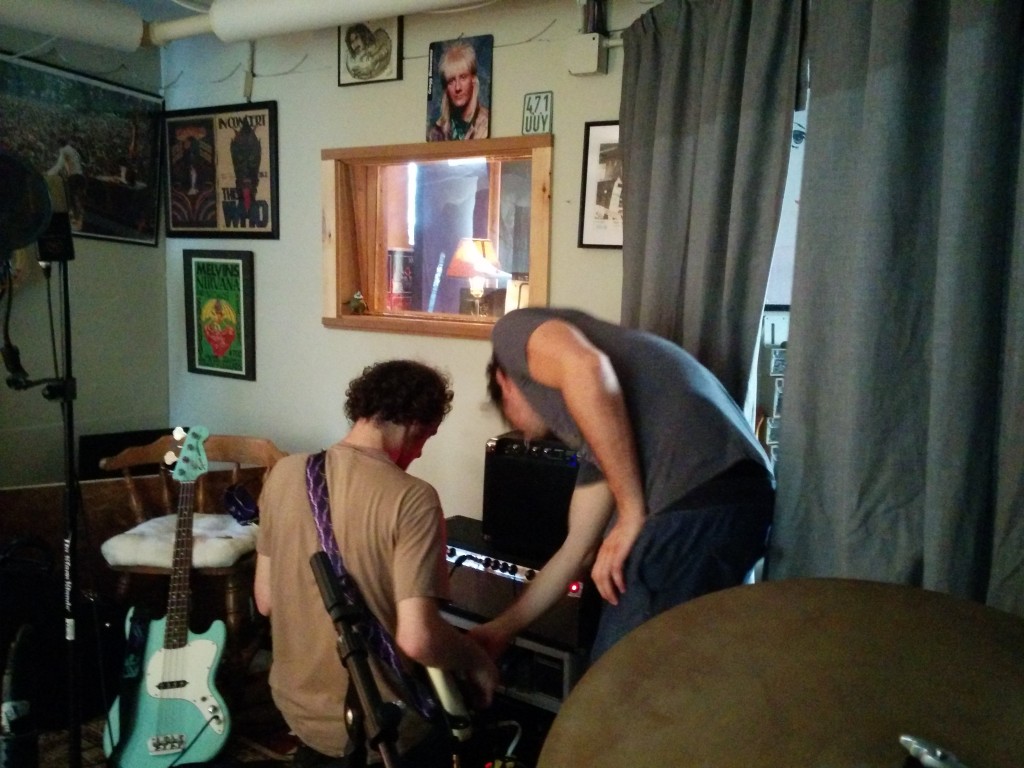 Curtis Killian, Clinton Degan, and Hocus Pocus. This pic/jam was in Curtis’s new apartment’s basement, which just happened to come with a RECORDING STUDIO BUILT IN. 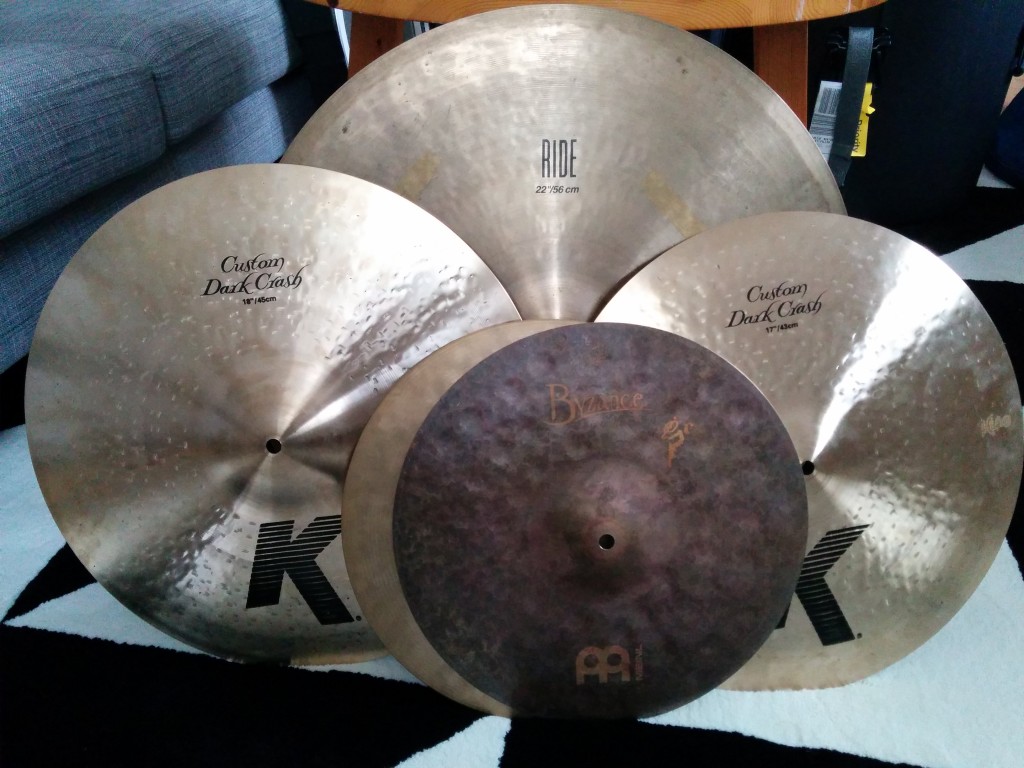 Added a few new members to the family 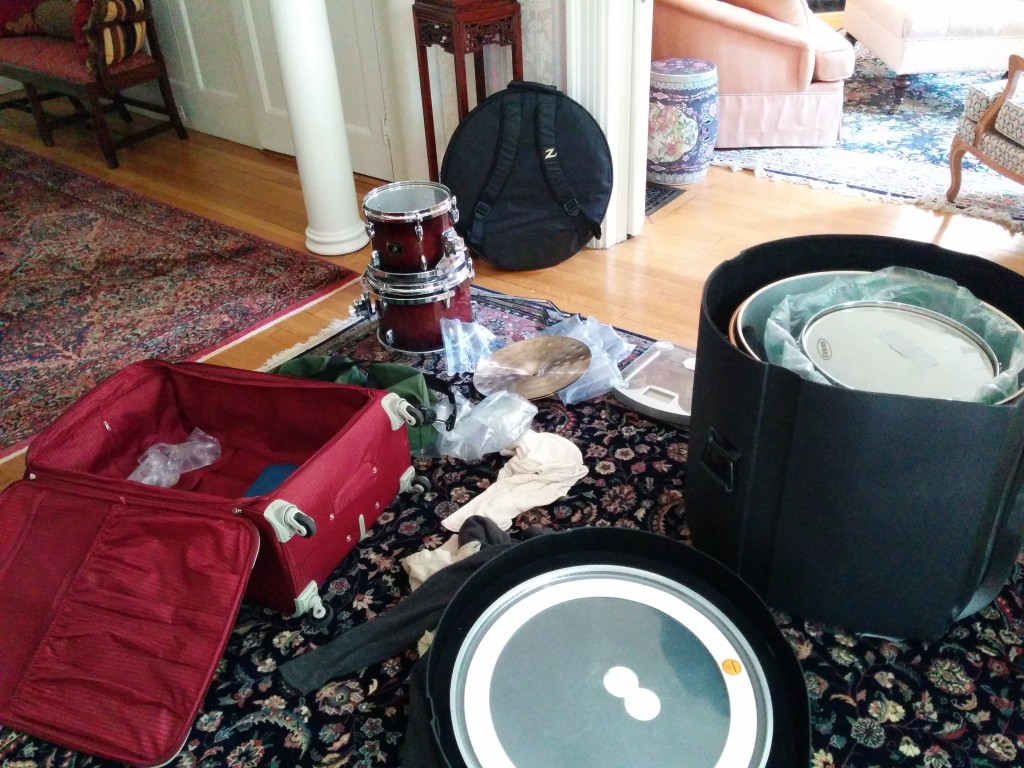 Trying to figure out how to fly overseas with a full drumset. Not recommended

Back in Europe I got to hit the road with my friends from Mr. Kowalsky.  I maintain that nothing gets an audience moving like ska and reggae.  We hit a few cities in Germany, as well as Amsterdam and Paris.  We also shot a little video in Paris, which is guaranteed to make us look ridiculous, so that should be fun. 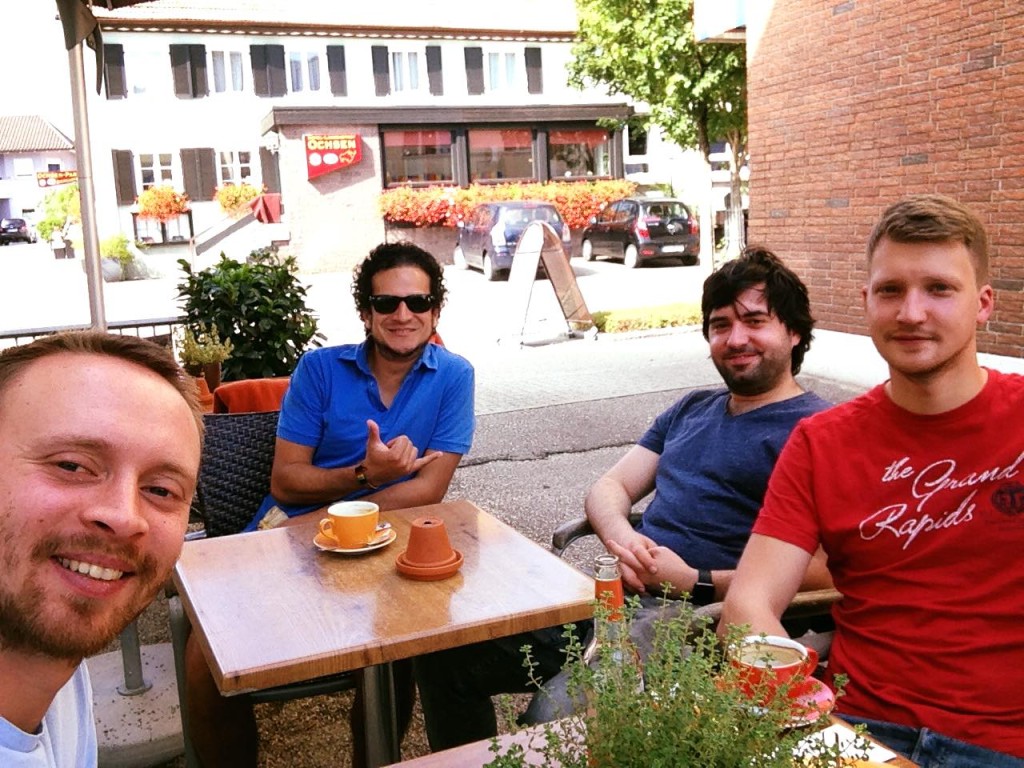 On the tour I got to play two awesome kits: a 1964 (I believe) Gretsch which, as can be expected, just had the sweetest tone… 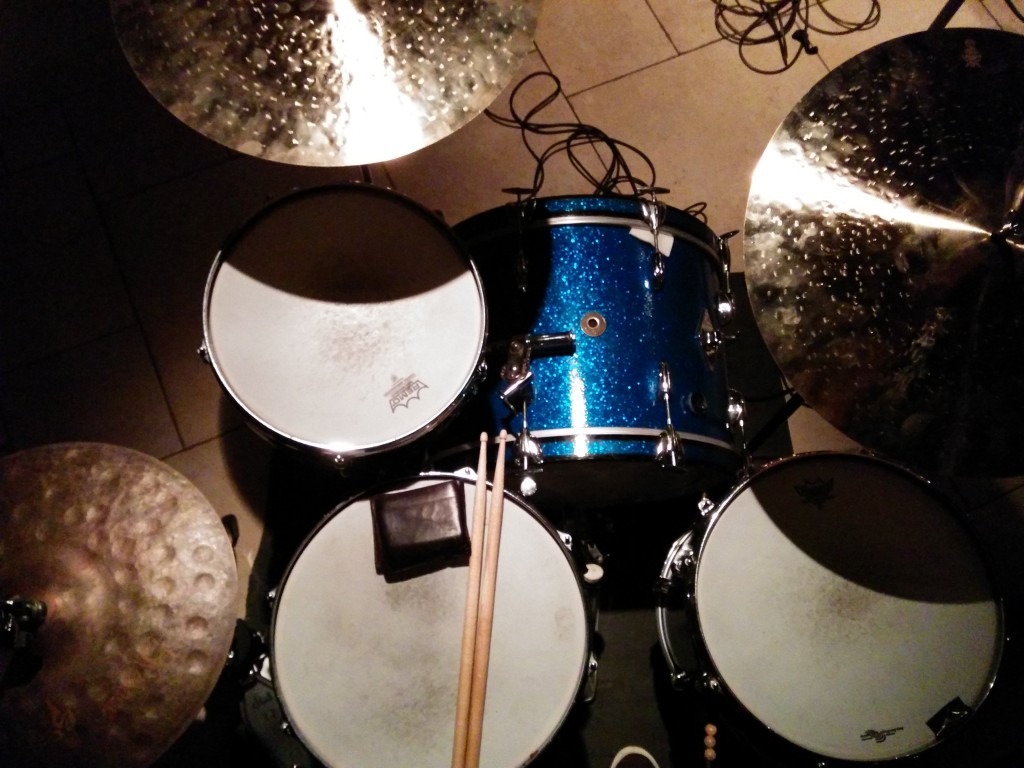 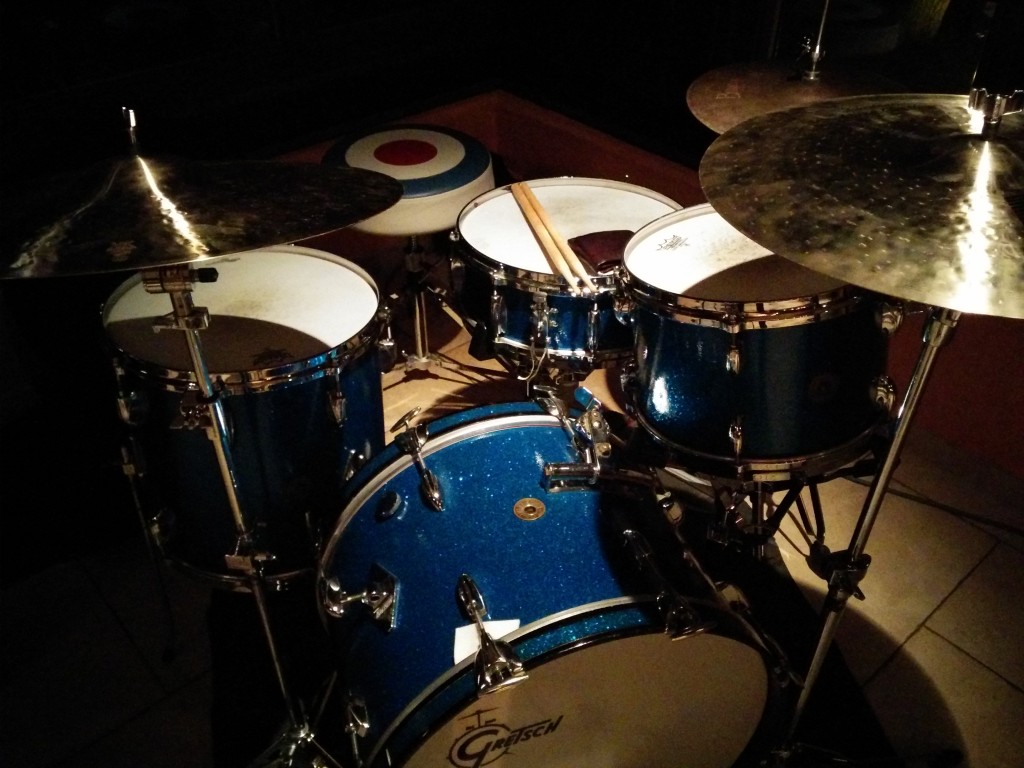 And, finally!  A Ludwig Breakbeats!  It sounded so much better than I expected.  Tons of punch to the kick and the toms have a great tone.  I’m still working on my epitome-of-portability suitcase drumset (henceforth known as the Kofferkit), but I’ve gotta put this thing back on my radar for other small gigs that need something a little more “traditional.”  Was super psyched about this one. 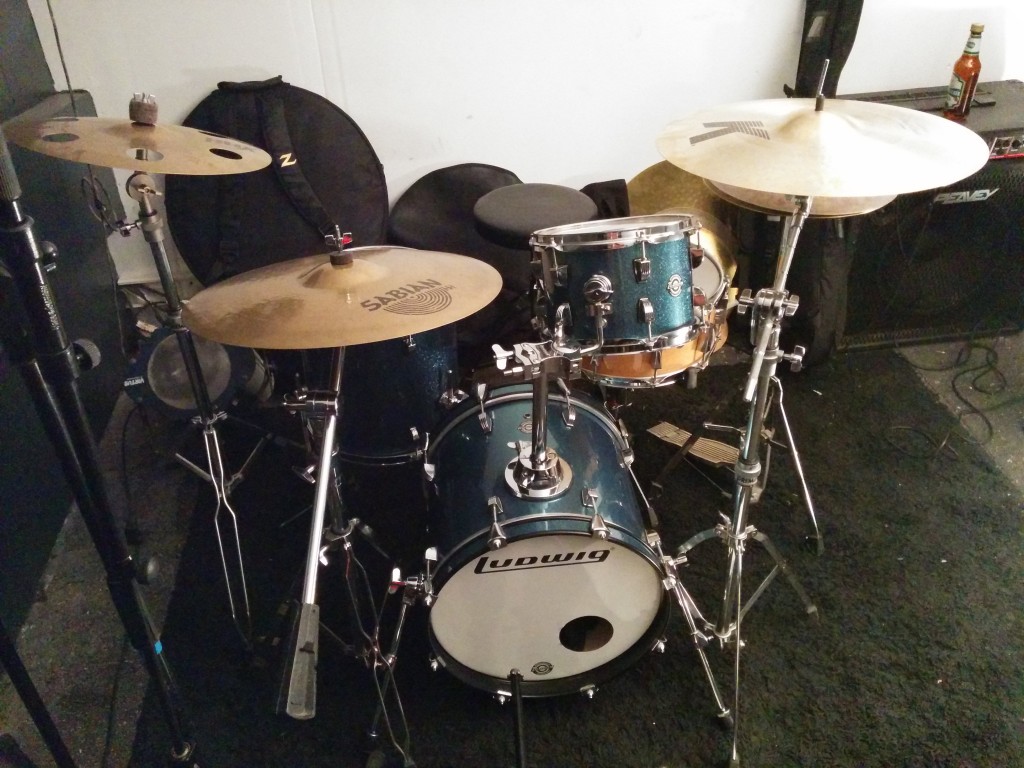 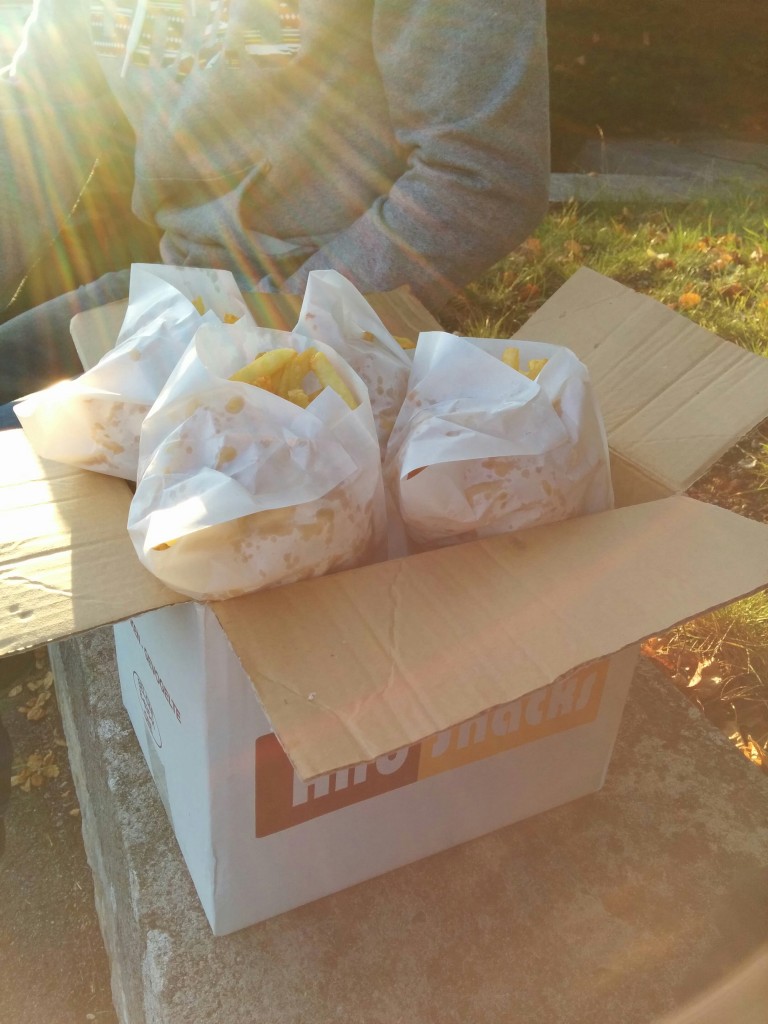 Belgian Fries (Or: the Rumors are True) 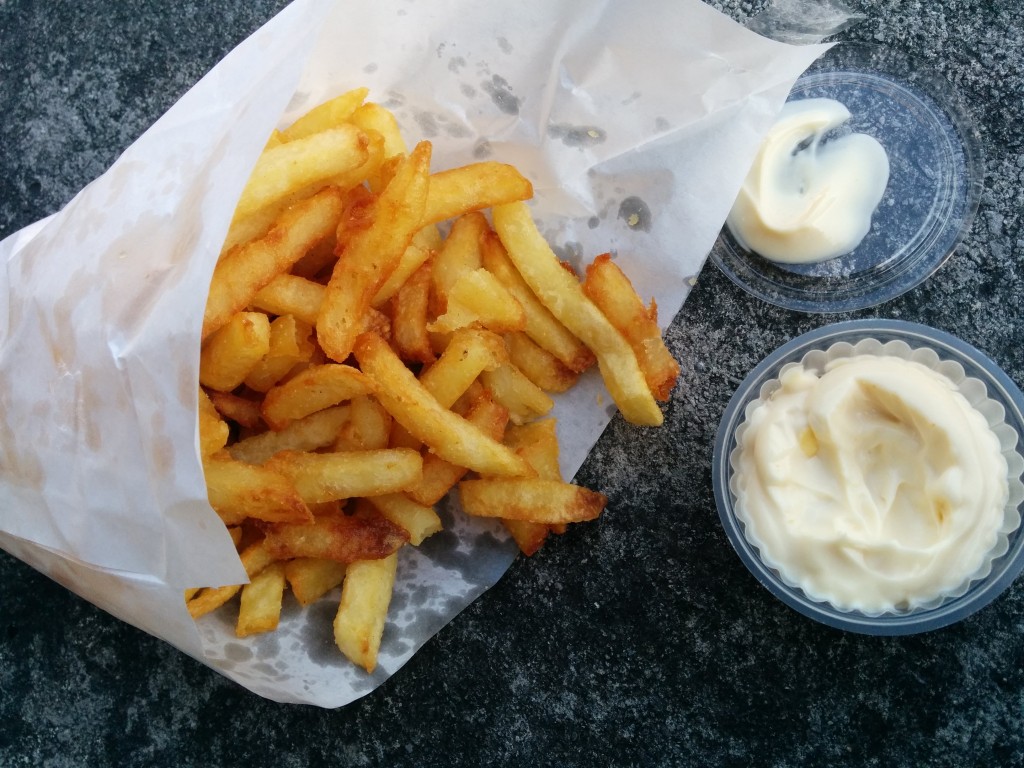 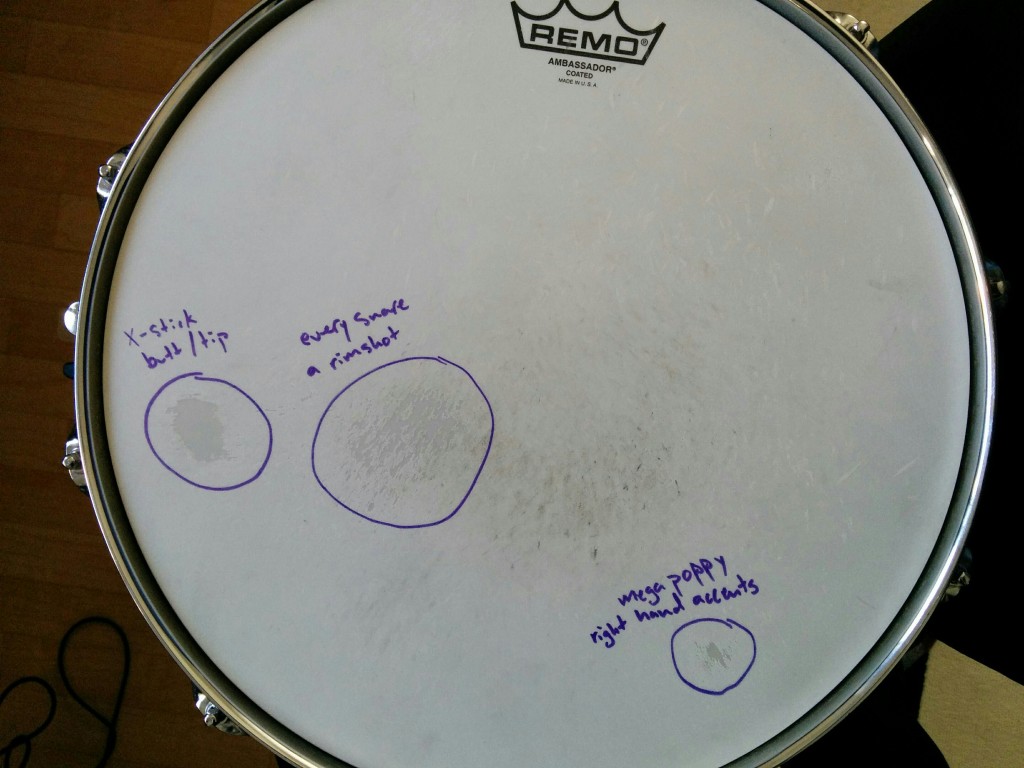 This was a cool one: a wedding at one of the wildest locations I’ve played in.  They rented a second church for their party.  Note the relative size of the drumset on the stage – and the pictures don’t even entirely catch the magnitude of the place! 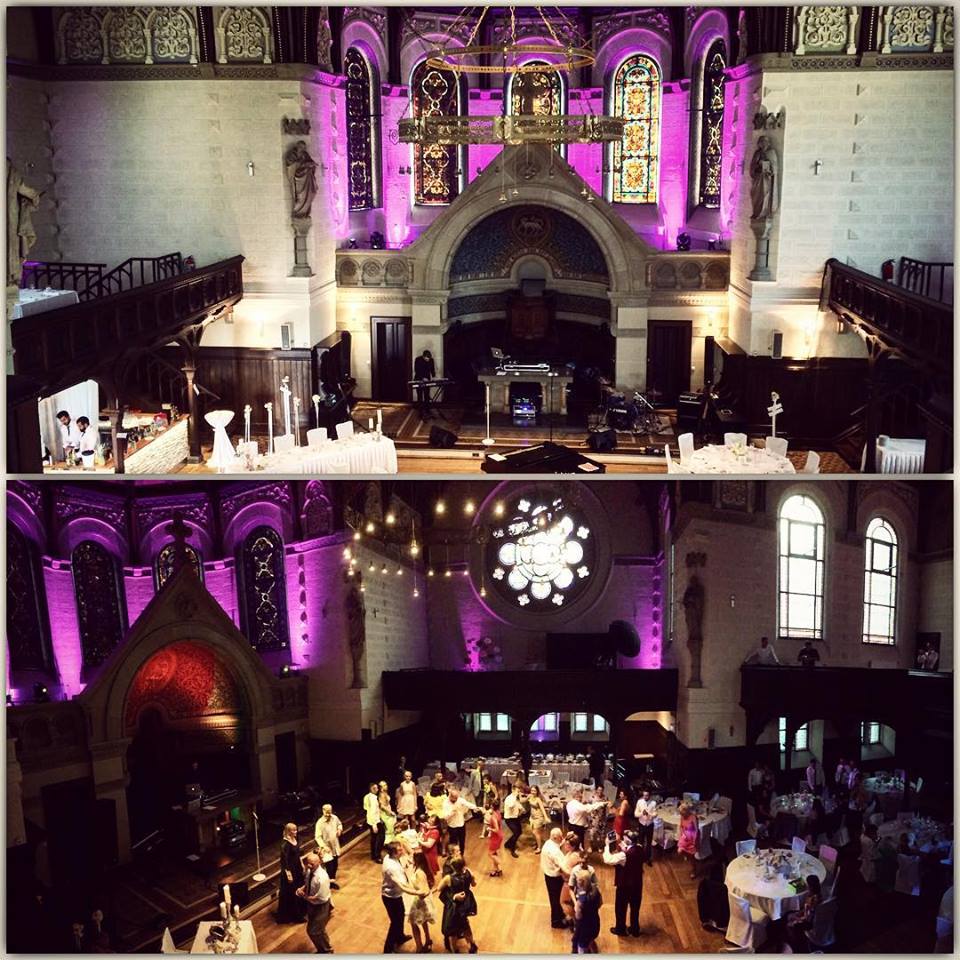 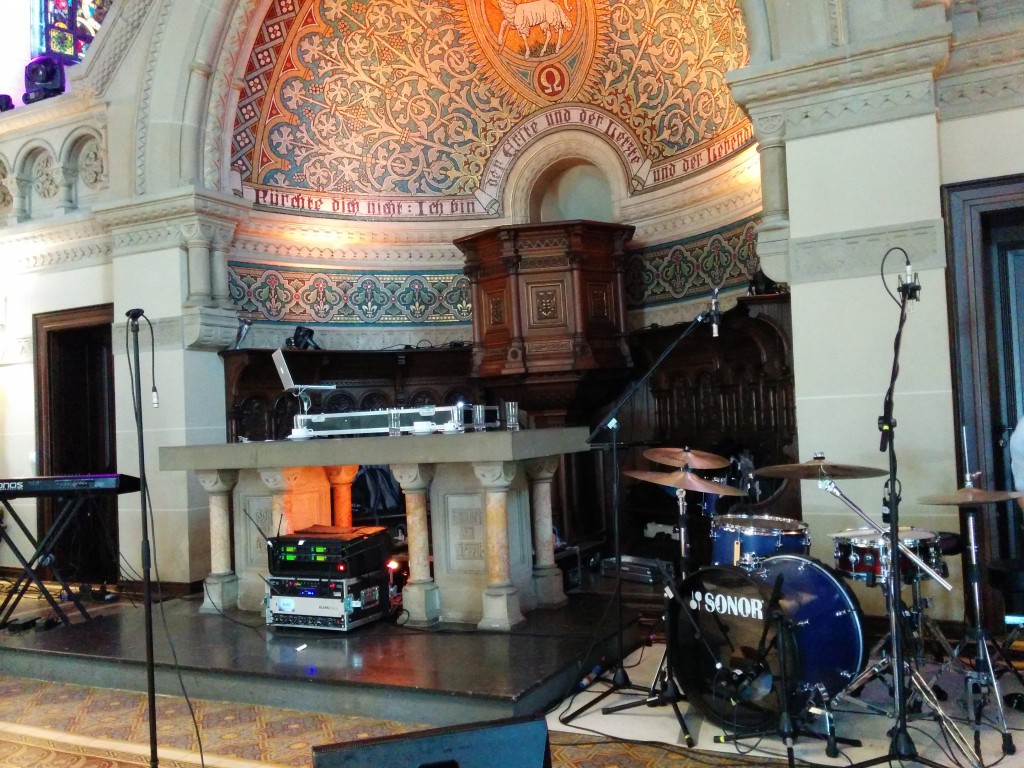 At this wedding I got to work with Phil Kamp, a champ, by the way, for making the above-pictured room sound not just reasonable but better, who brought along this little guy – a KLANG:technologies monitoring station.  This ran to our in-ear monitors and created a 3D mix for us which we could control wirelessly from individual iPads, not only controlling volumes and EQ in our buds, but also actually moving around the other instruments in our mixes with the graphical interface, putting them further to the right, left, above, below, in front, behind… all of this to actually mimic the stage set-up, or mock-up a rehearsal set-up, or whatever we felt like.  It was amazing. 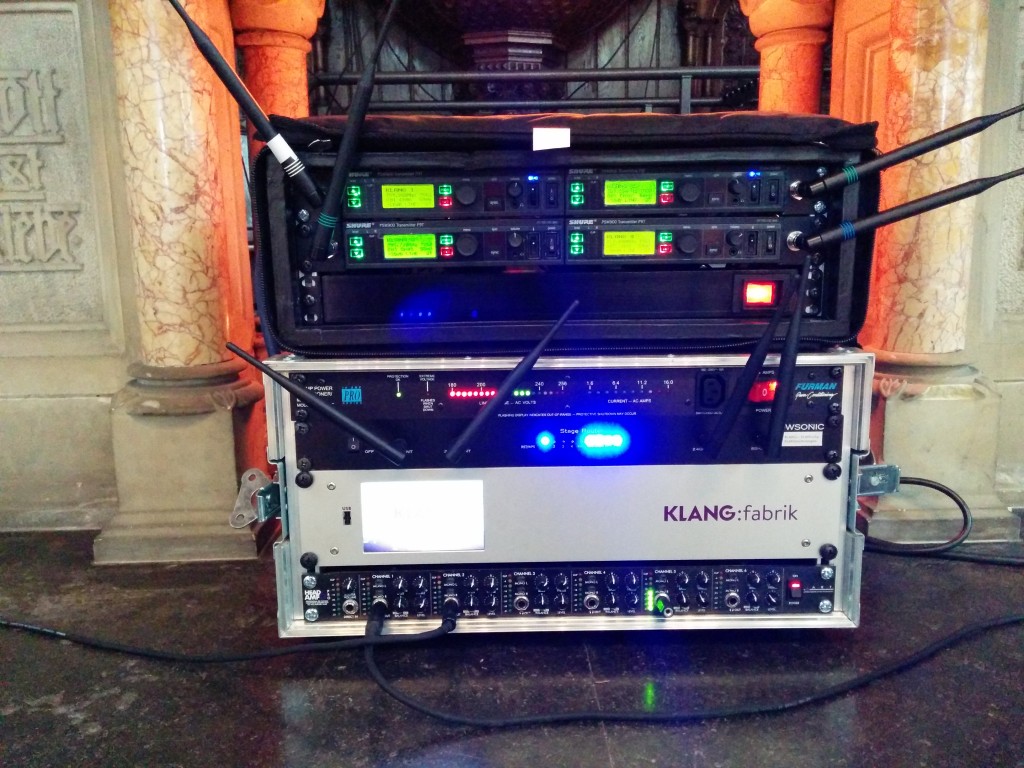 I also got to do some studio work; one session was with the DopeBoyz, who are beat makers and one of whom I study with.  Here we are getting set up.  Hopefully I’ll be able to link to some final products sometime in the near future, but as they post the beats for purchase, occasionally with exclusive rights, a link may be short-lived.  Here’s a short video of the session they put together. 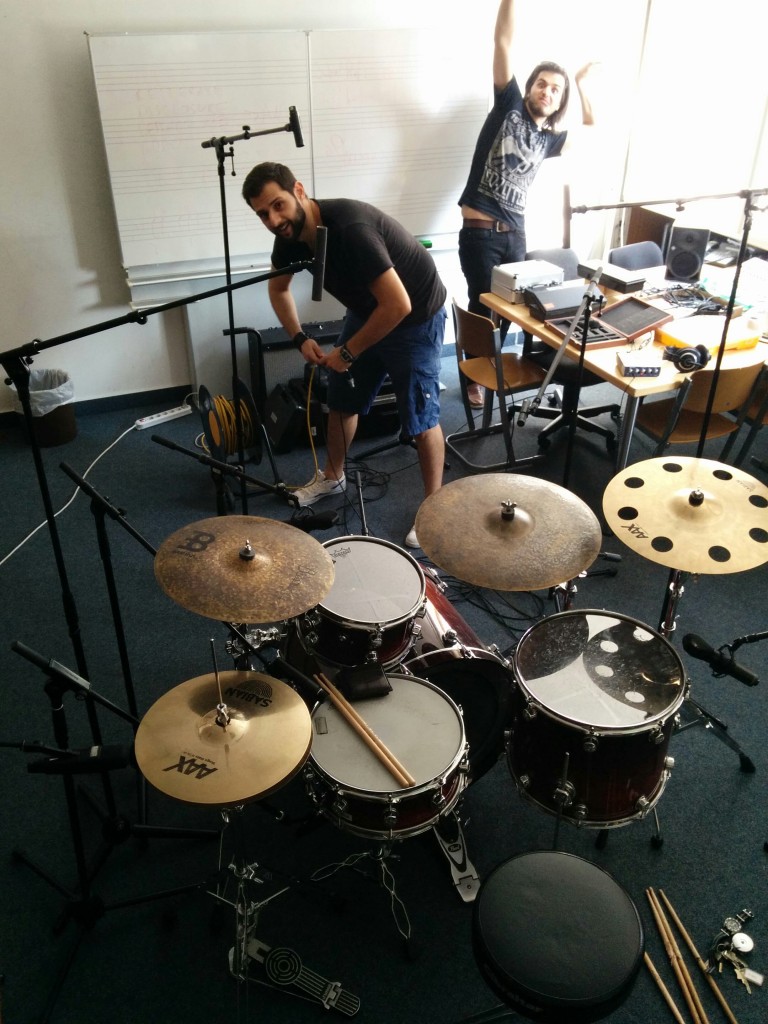 Of course, there was some time to relax.  I’m always looking for a reason to get on the bike, so I was happy to take a short tour up to Osnabrueck and back with my friend Lucky.  (If the authorities are reading this – we had permission to camp! 😉 ) 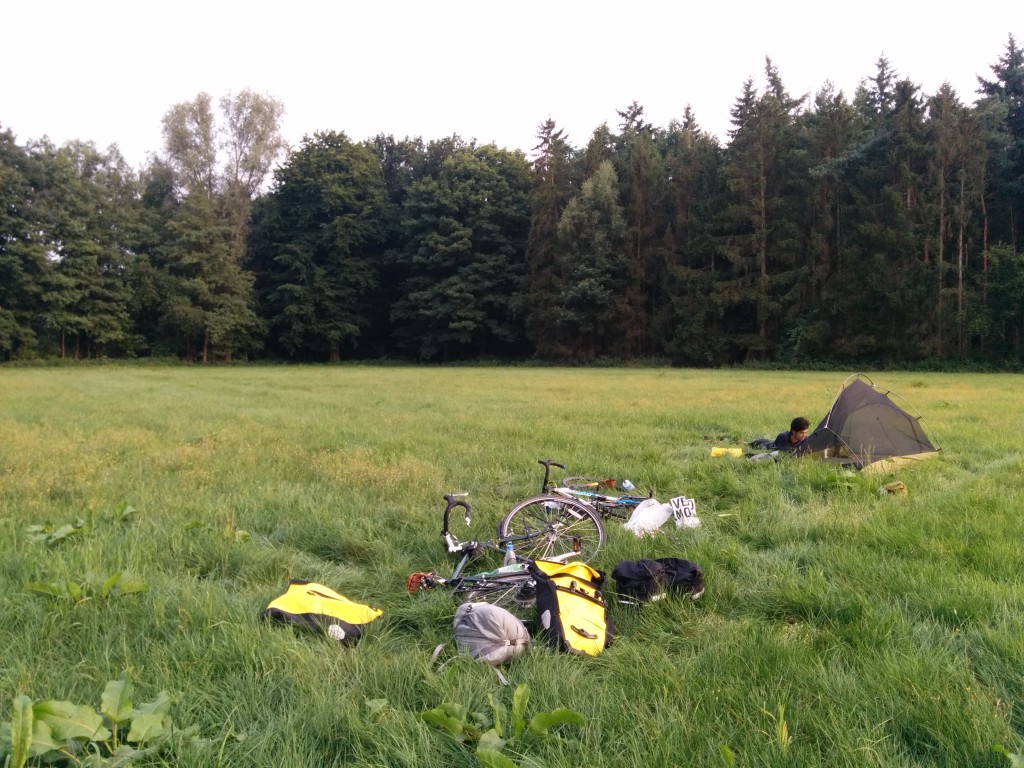 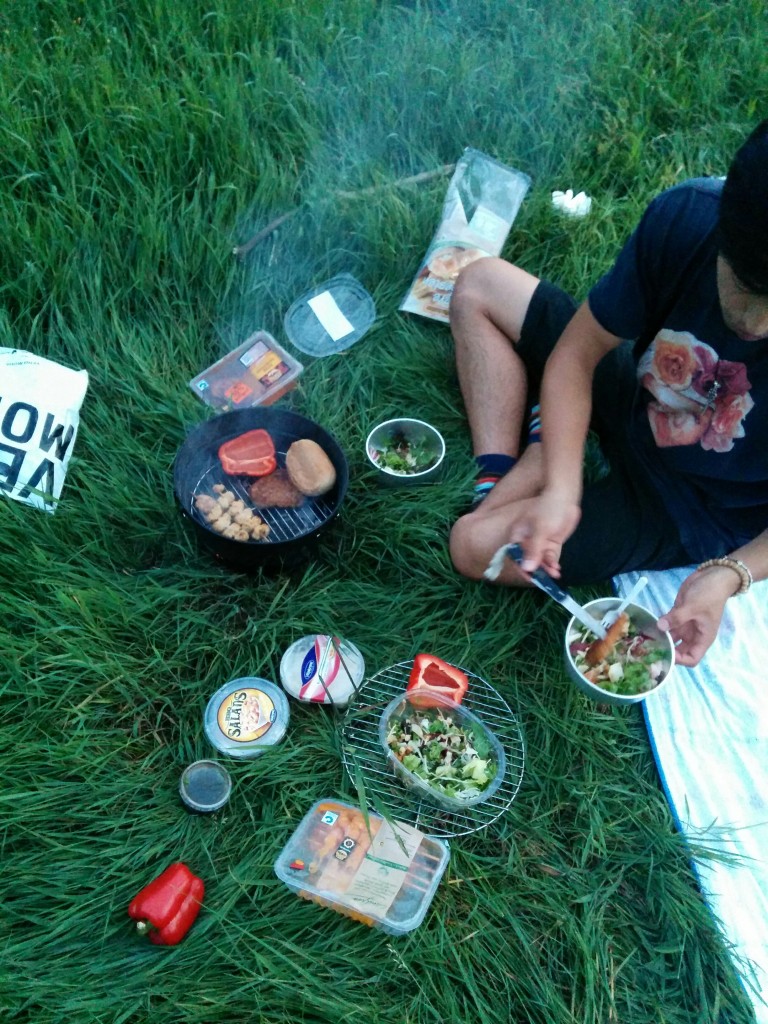 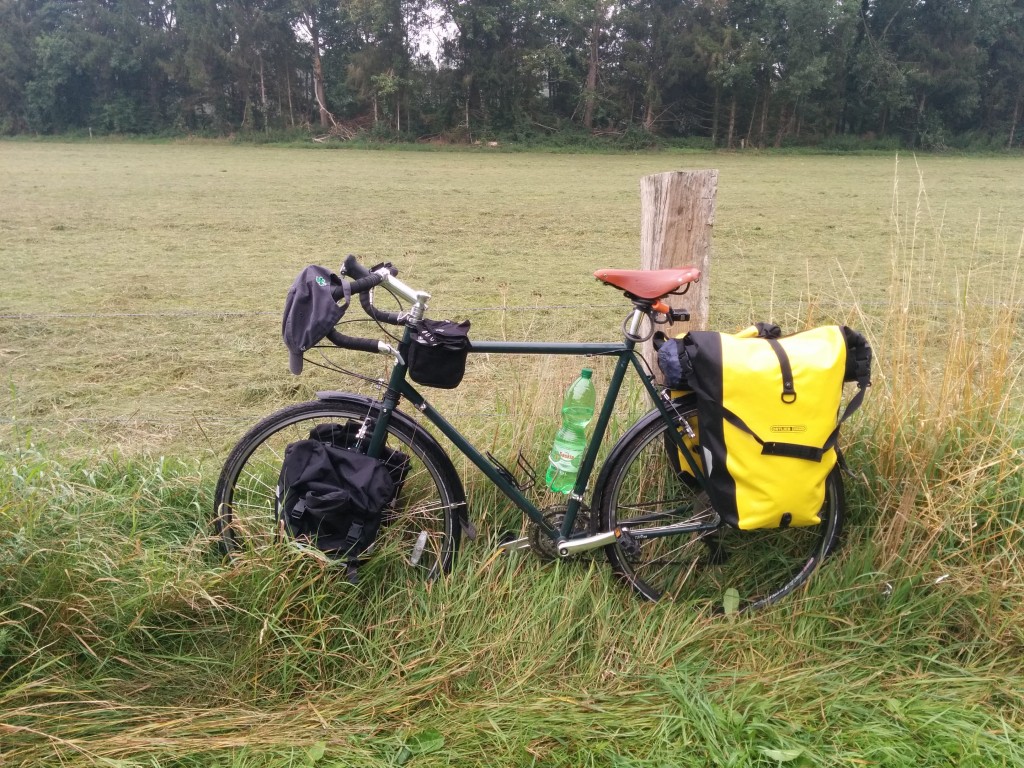 Way overloaded for such a short tour, but in my defense, I was testing my new front rack and panniers, plus I brought the tent!

The new semester just started today, so that’s the next step.  I’ve been working on a song of my own, as well, so I hope to have something to show before long – it would/will be my first personal work posted, so I’m excited about that.  And there are a few acoustic Shubangi gigs coming up soon, Nov 6th and 7th in Koeln and here in Muenster, respectively.