I have some old shelving from my last apartment sitting around, and decided the other day to put some of it to work.

Today, I cut one of the shelves up and screwed it back together in a different shape with exactly 0 planning, and now I can use my computer standing!

I point out the “0 planning” bit because what follows is an account of building the desk, replete with some really ridiculous conundrums that could have easily been approached better or avoided entirely with a little foresight.  But I just wanted to build something; to hell with logistics.

It was pretty simple to put together and I made a real hack job of it (big surprise), so it only took a few hours including lunch.  And, it was free! – it only took 1 unused shelf, a couple old little wooden garden stakes, and some screws.  (Here’s a timelapse video of the process.)

I wanted the legs of the table about 13.5″ high so the finished desk would be about 14″ in height.  (Note the frequent use of the word “about.”)  So I stood the shelf on end and measured 13.5″ and 27″ from its edge, drawing guide lines using a level.  (I realized later that the garage floor itself isn’t level, so my lines were in fact somewhat slanted… but not enough to make a big difference in the end.)  I used an old hand saw to cut along the lines, creating two 13.5″ tall legs.  I flipped each of these and cut it in half along its length, making four legs.  The shelf was about 11″ deep; I did a pretty slop job of cutting the shelves in half, so two of the legs are around 5″ wide, and the other two are around 6″ wide.

I tested the legs for straightness by standing them on the floor on either end to see which end was the least wobbly on each leg.  Only two of them had no wobble at all, but for the other two I devised a little trick:  by sawing a shallow little arch or long notch in the middle of the edge (so shallow you can’t really even see it), leaving about an inch to half an inch of straight edge on either side of it, you can ensure it won’t wobble by giving it two smaller contact faces rather than one long one, which makes it less susceptible / impermeable to wobble.

I figured about 30″ was a good width for the desk.  I didn’t really measure this against my actual desk; I just decided my desk surely must be wide enough to accommodate a 30″ upper-level easily and hoped for the best.  (Worked out fine, as is evidenced by above photo, just so there is no mystery.)  I lined and cut 30″ and 60″ from the edge of the shelf, which left just a little of the shelf left.

I picked the less-ugly face of each 30″ board, and laid them down side by side, pretty-ish faces down.  The two boards had to stay together because there wasn’t going to be a leg between both, so I took the little shelf left-over chunk, cut it in half, and straddled the boards with them.  But then I realized I couldn’t figure out how to screw these braces to the bottom of the desk.

Ultimately, I put down the brace-boards first, then laid one desktop board over them, face up, screwed that to both braces, then did the same with the other.  I decided it was done and went to set it aside, but the desktop wouldn’t move.  I had actually ended up screwing the desktop straight onto my work table because the screws were a fair bit too long.  Duh.  You can see them poking out in the below picture. 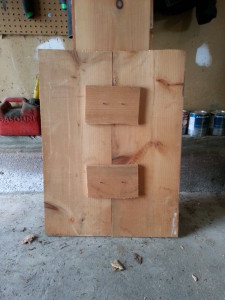 I sawed a thin garden stake in half, and then half again, backed out the desktop brace screws a little bit, scootched the desktop over so it was hanging over the edge of my work table, held the garden stakes in place under the holes where the screws had popped out of the bottom of the desktop, and pushed the screws down through the garden stakes.  I probably looked ridiculous, trying to accomplish holding the desktop in place and up against gravity, setting a screw, using a power drill, and holding the bits to be screwed to the underside, all at once and with just my two arms.  Anyway, I went through the trouble just so I wouldn’t stab myself later and curse; great success visible below. 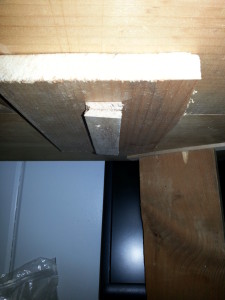 I decided to attach the legs in the shape pictured below for stability.  If I make another, the back legs will not be at quite such an angle; there isn’t any wobble or backwards flex as it stands (heh heh), but I think it’d probably be a little less likely to fall backwards and break if the back legs were a little straighter, pointed more back-to-front than side-to-side.  Note: I recognize my sitting desk is a mess. 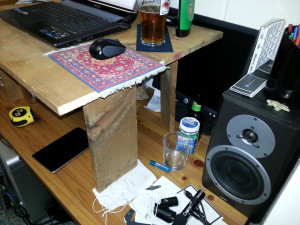 Attaching the legs to the desk was the part that could have most used some planning, though.  I had no vice, no assistant, and no experience.  In fact, I don’t even know if a vice would have helped.

So, naturally, I took the most straight-forward and ridiculous approach possible of balancing the desktop on the legs while they stood precariously upright on the ground, and eyeballed my screw angles.  It shouldn’t have worked, but it did.  Without one misfire.  What wonders never cease.

One snafu: one of the legs, somehow, ended up about .5″ shorter than the others.  I took the tried-and-true tack:  garden stake to the rescue! 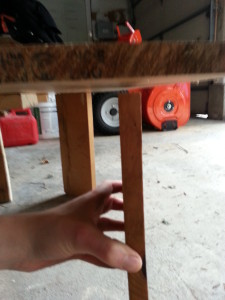 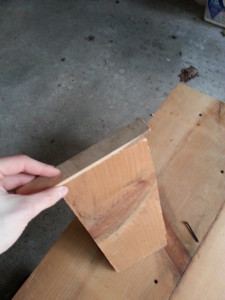 The final desk does not wobble, and actually feels surprisingly sturdy.  Given that I did put a few hours into it, though, I might screw in some little metal braces underneath to keep the legs from buckling.  But this will presumably not happen, if luck’s got anything to do with it, until I have at least two glasses of liquid and a bowl of something stain-prone on it, so maybe avoiding such a scenario is a good enough defense. 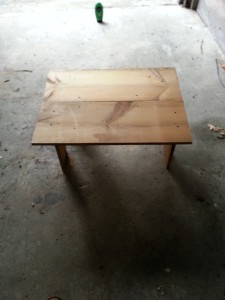 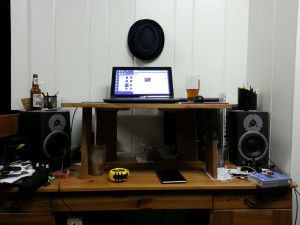