Here is the rough proposal / guide I wrote that my friend Dan and I used to construct a cob oven.  Cob is basically an earthen mixture (clay, sand, water, straw or sawdust, with variations) that has been used for thousands of years as a construction material.  Mixed accordingly, it can have great thermal properties, eg. soaking up and slowly releasing heat (and sunlight heat energy!), or allowing cool air to similarly pass through.  Someday, I want to build a house of it.  Google “cob house” and prepare to have your mind blown.

Anyway, for now, Dan and I thought an oven would be a good introduction to cob, as its thermal properties make it a great outdoor oven option on the cheap/free; plus, it’s totally earth-friendly and all natural, and fun to build.  With this guide and maybe a little additional research, you should be able to make one, too.  Photos forthcoming!  Also, this is not edited or polished to be published.  I just felt like putting it up anyway.  (Note:  ultimately, we needed less detail/steps and less materials than this guide proposes to make our fully functional oven; we didn’t refer to this guide during the actual construction so we cut a few corners and still came out with a great product.) 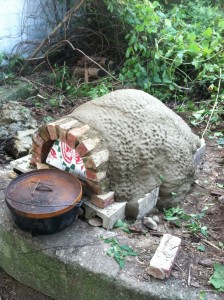 The oven, after first cob layer

In order to build an outdoor, wood-burning oven as cheaply and naturally as possible (while keeping durability and efficiency in mind), the process is designed around these ingredients:

Cob is (for our purposes) a mixture of water, clay or clay-rich subsoil, sand, and straw. High thermal mass cob is a mixture of around 25% clay and 75% sand. The most insulative cob is a mixture with as much straw in it as possible while keeping a form-able consistency. By building an oven of both types of cob in two layers, we can achieve high heat efficiency and long cooking length.

Foundation: old cinder blocks, or stones, or bricks. Between three and four feet high (think of a good working height). Around two feet in diameter would provide space in the oven for around three medium-sized loaves of bread or one or two personal-sized pizzas, so we can make it a bit bigger if we wish.

The foundation’s outer ring of stone is filled in until the top ~4”, leaving a small pit at the top of the foundation.

First into these top 4” is a flat, thin layer of wet (but of form-able consistency) sand. On top of the sand are the beer bottles, laid on their sides, as a layer of insulation. The space around the beer bottles is filled in with more wet sand, and this layer is then covered with another thin layer of wet sand, made as flat as possible. This top layer of sand may need to be a little thicker if the oven floor bricks are uneven on their bottom face.

The firebricks or red clay bricks are laid out as the floor of the oven on top of this last layer of sand, flattest face up. Laying brick outward from the middle using the “kissing” brick-laying technique and then tapping the bricks flush ensures as flat and tight an oven floor as possible, which is important for heat insulation and cleaning. (A couple bricks may jut out in one direction as a lip to make loading and cleaning the oven a bit easier.)

Working inwards from the outer edge of the dome (the circumference can be drawn using a string from the center of the oven floor), the wet sand dome is built until it is of the right height. The dome is then covered with strips of newspaper.

High thermal mass cob is mixed in the tarp. A ratio of 3 parts sand to 1 part clay is best. If subsoil, it should be certain that there are no organisms in the soil (no topsoil), as decay and rot can lead to some cracking. The clay and sand are folded and mixed on the tarp dry first as they’re difficult to mix when wet. Then, water can be added while the cob is stomped together until it is sticky enough to be form-able but not too liquidy – the consistency can be tested to be right by forming the cob into a ball and rolling it in the palm. The ball should be just sticky enough to keep its shape, but dry enough that it doesn’t pancake while rolling in the palm. If the ball is dropped, it should not go “splat.” The cob is then formed into small “loaves” or balls, which can be easily pressed into place during cobbing.

Also, an arched mouth of the oven is made by arranging and cob-mortaring bricks around a piece of cardboard cut and measured to represent the mouth opening. By a few accounts, the height of the mouth should be ~60% of the dome height so as to best draw cool air when firing. In one account, an experienced builder stated that he built his mouth at “a critical 63%” of the dome height.

The mouth of the oven can be put in place (over the brick lip if one was installed), and the thermal mass cob balls are formed around and pressed against the sand dome to create the inner oven wall, at a thickness of ~4 inches. This layer should be given a some time to dry.

After some drying time has been allowed, the sand can be dug from inside the oven. The newspaper strips over the sand dome provide a guide for when to stop digging as you’ve reached the cob wall!

Insulative cob is made as the outer wall layer. Thermal mass cob is made in the same way as described above. On the side, straw is chopped into smallish bits. It should be certain that the straw is straw rather than hay, that is, dead and dried, for the same decay/rot consideration mentioned before. (Sawdust can also be used). Handfuls of straw are then dropped and gradually stomped into the cob. Large clumps of straw are harder to integrate into the cob, so good practice is to “sprinkle” straw in front of you as you walk around in the cob and stomp it in gradually. Best consistency of insulative cob is a very high straw content while still form-able.

This layer of cob is applied over the thermal mass cob once that’s had some time to dry. A good thickness is between 2-4”. This cob is applied in the same way, but small finger holes can be made in the cob as it is applied. Subsequent cob “loaves” can be pressed into these holes so as to “lock” the straw together and better the overall structural integrity.

Using the scrap wood, make a little wood door with a handle to hold the heat after firing. The piece of rounded cardboard from earlier can be used to get the size right.

I’ve read that a natural plaster can be applied to the outside to help protect from the elements, like a lime-based plaster that would breathe and not cause cracking in the cob. This is also good for larger structure construction. For now (and even post-plastering), propping a tarp over the oven (especially before rains) is boranj!